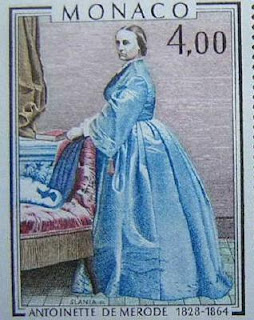 Antoinette Ghislaine, Comtesse de Mérode-Westerloo was born on September 28, 1828 in Brussels, Belgium to Count Werner de Mérode and his wife Victoire de Spangen-d’Uyternesse. It was on her eighteenth birthday in 1846 that she married HSH Hereditary Prince Charles of Monaco, son of Prince Florestan I and Princess Caroline of Monaco in Brussels. Some thought it had taken Charles longer than necessary to marry, he was handsome, wealthy and heir to the throne of Monaco after all, but most agreed that his new Belgian bride was worth the wait. Described as blonde, beautiful, kind and also quite wealthy, the two made an attractive couple and Antoinette brought a considerable dowry to the Grimaldi family with her. She came from an illustrious family whose ranks included many Belgian national heroes and her uncle was the famous prelate Monseigneur Frédéric-François-Xavier Ghislain de Mérode who held many important posts under King Leopold I of the Belgians and was later Minister of War to Blessed Pope Pius IX.

After their marriage Prince Charles and Princess Antoinette went to Monaco where, despite the rising problems that would eventually lead to the loss of more than half the national territory, the Monegasque people gave them an enthusiastic welcome, falling instantly in love with the handsome young couple. Later, like most of their predecessors, Charles and Antoinette set up house in Paris and it was there, on November 13, 1848 that their son, Prince Albert, was born, thus securing the Grimaldi succession for another generation. Princess Antoinette was a little out of her element in the glamorous high-society of Imperial France but her mother-in-law Princess Caroline took her in hand, showing her the ropes so to speak, and the beautiful young Belgian Princess of Monaco was such a success that she was soon a favorite in the court of Empress Eugenie; a fact which was prestigious but also brought with it a great deal of expense.

One of the lasting legacies of Princess Antoinette was the purchase, with her dowry, of the Château de Marchais which has remained in the Grimaldi family ever since and was the favorite country retreat of many generations including Prince Rainier III, Princess Grace and their children. The money she brought to Monaco also helped in the establishment and improvement of the Monte Carlo casino which soon proved to be a very beneficial investment, bringing hordes of wealthy tourists to the gaming tables and solving the financial problems of the principality.

In 1855 Versailles was the site of one of the major social events of the time when Queen Victoria and Prince Albert of Great Britain paid a royal visit to Emperor Napoleon III and Empress Eugenie and a grand ball was held in their honor which Prince Charles and Princess Antoinette were invited to attend. Princess Antoinette was greatly impressed by the event and made up her mind then that her goal was to see her son Prince Albert married to a member of the British Royal Family (a cause her mother-in-law was to zealously take up in her absence).

Prince Charles III and Princess Antoinette had a very happy marriage and Charles depended greatly on his hard-working wife, whom he called his “Angel”. Charles was already suffering from poor health and failing eyesight when Princess Antoinette was diagnosed with cancer in 1862. Nonetheless, she took attentive care of her husband, ignoring her own terminal illness, in the most selfless fashion. Even when her worsening condition forced her to leave Monaco and retire to Marchais for the benefit of the country air she wrote constantly her husband, inquiring after his health and that of her mother-in-law, warning that the devoted old woman should not put her own health in danger by doing too much to help Charles III.

Princess Antoinette seemed out of her element if she could not be helping others and despite her condition she could stand to be away no longer and returned to Monaco to look after her husband and mother-in-law. With a doctor and two maids she made the journey back to the Princely Palace, a trip which took a toll on the rapidly worsening condition the Princess herself was suffering. Only three months later HSH Princess Antoinette of Monaco passed away on February 10, 1864. Prince Charles III was devastated by her loss and was forced to rely ever more on those around him, mostly his mother at first, as he became more infirm and withdrawn, rarely leaving the Princely Palace in his final years. Princess Antoinette is not as much talked about as some other Princesses of Monaco, but she was an exemplary consort in every way. Few others were ever as devoted, selfless and caring as the Belgian Princess of Monaco.
Posted by MadMonarchist at 12:50 AM