HSH Prince Albert II of Monaco arrived in the south Caucasian Republic of Georgia on Sunday for an official visit that will end today. The Sovereign Prince has for some time now made it a matter of policy to strengthen ties with East European countries and peoples. Georgian President Mikheil Saakashvili and other dignitaries were on hand to greet the Prince at the airport and the President escorted the Prince to several sites of cultural interest in Mestia, including one right up my alley in the area known as Lanchvali where the traditional style of that part of town (which goes back to the Middle Ages) is being restored. The Prince visited many areas where the Georgians proudly displayed their rich and ancient heritage, including something we're always fond of here at Mad for Monaco, some groups of very colorful folk dancers. At the end of the day, the Prince went to take in a musical at the Opera House in Batumi.

The next day, again with President Saakashvili acting as travel guide, the Prince visited Kvareli where he was given a demonstration of new techniques introduced there for the harvesting and processing of grapes and, as he is known to do, Prince Albert got involved himself in lending a hand with preparing some wine (which Georgia is known for) which the monarch of a country on the borders of France and Italy would not be totally unfamiliar with. The President also conducted Prince Albert to Dmanisi to visit an archaeological site (something of interest to the Prince as it would have been to the first Prince Albert of Monaco) and then to a meeting with the members of the National Olympic Committee of Georgia. Afterwards, the Prince was off to the Georgian National Museum in Tiblisi where he had been asked to speak. It was a busy day but the Prince also made it a point to make time for a very special visit to the home of the late Georgian luger Nodar Kumaritashvili -a name not everyone will remember but all will certainly remember his tragic fate. That was the young Georgian athlete who was killed in a practice run at the 2010 Winter Olympics in Vancouver, Canada, which stunned the world, caused a re-work of the event in question and a wave of sympathy directed toward the nation of Georgia. The Sovereign Prince met with the parents of the late athlete and presented them with a special medal of honor in memory of their son. It was a very touching scene. 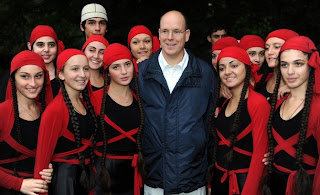 Prince Albert poses with a group of Georgian folk dancers 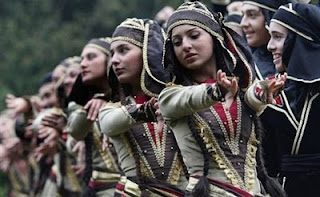 Some very striking Georgian dancers performing for the visiting Prince 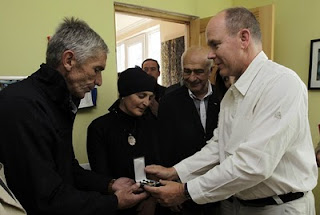 Prince Albert II presenting the medal of honor to the parents of Nodar Kumaritashvili
Posted by MadMonarchist at 3:03 AM