Accession Day of Albert I 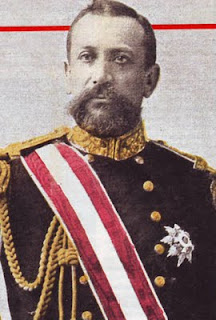 It was on this day in 1889 that HSH Prince Albert I succeeded his father (Charles III) as Sovereign Prince of Monaco. Under his leadership, the character of Monaco was to change a great deal as the principality became a center for scientific research, culture and peace. Although his father had never understood his fascination with the sea, Prince Albert I established the Oceanographic Institute of Monaco which has grown in prestige ever since and remains a major center for oceanographic research to this day. His interest in archaeology also prompted him to found the Institute for Human Paleontology and the actions of his consort, Princess Alice, brought high culture to Monaco in the form of the opera, ballet and theater. When the threat of world war began to appear on the horizon, Prince Albert founded the International Institute of Peace in Monaco to try to find a way to avoid such a disaster and having been a veteran of the Franco-Prussian War, the Prince was only too aware of what horrors resulted from the last time the French and Germans had had at each other. When the war came anyway, he intervened with the German Kaiser, who had been his friend, to lessen the suffering of people in Belgium and Alsace and he established hospitals and recovery centers in Monaco for the Allied soldiers. He was a great man and widely respected all around the world, the first Prince of Monaco to be known in America as well as Europe (he was the first Grimaldi to visit the United States) and it was quite traumatic when he died in 1922, honored by the people of Monaco and scientific societies all around the world.
Posted by MadMonarchist at 8:08 AM

Email ThisBlogThis!Share to TwitterShare to FacebookShare to Pinterest
Labels: Albert I, anniversary