Prince in the Middle East

Despite the recent troubles there, HSH Prince Albert II was not put off from visiting Lebanon, arriving late Wednesday. Information Minister Tareq Mitri met him at the airport and there was a review of the guard of honor with Defense Minister Elias al-Murr. Later, the Prince met with the Prime Minister, Saad al-Hariri and the Cardinal Patriarch of the Maronite Christian community. Later the Prince visited the UNRWA at the ESCWA building in Beirut. Monaco and Lebanon have more in common than most might think. As a French mandate, Lebanon was once a protectorate of France as Monaco has long been and both are members of the community of French speaking countries. The fleets of Charles Grimaldi also once raided Venetian shipping off the Lebanese and Syrian coasts. 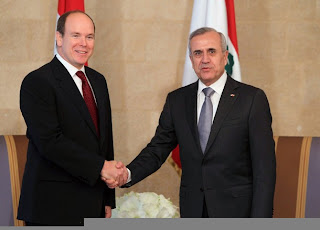 Posted by MadMonarchist at 2:19 PM