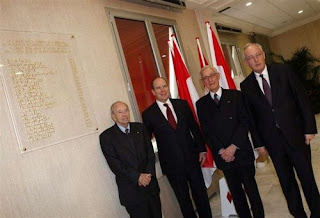 Last wednesday, HSH Prince Albert II joined Princess Caroline and representatives of the government in marking the 100th anniversary of the Monegasque constitution. Minister of State Michel Roger unveiled a commemorative plaque honoring the occasion on January 5, 1911 when HSH Prince Albert I formally made Monaco a constitutional monarchy following calls for political reform by the public. The Sovereign Prince made a speech to the 'four corners of the rock' in which he said that the adoption of the 1911 constitution was an important first step in the political evolution of government in Monaco to the state that it is today; a very free and open society with representative government all under the watchful eye of the Sovereign Prince. Of course, being the sort that does not put faith in any document by any government, I cannot help but wonder on this occasion if Albert II will become the first Prince of Monaco since the adoption of the constitution to allow it to function throughout his reign without interruption. I vote "no", it is a fine thing to celebrate and all, but at some point I think he should suspend the constitution, if only for a day, just to keep from breaking tradition and just so everyone knows who's in charge!
Posted by MadMonarchist at 12:00 AM