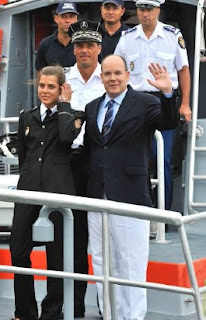 She's glamorous, she's gorgeous and she's fighting crime in the skies and on the high seas! Okay, not really but last Tuesday Charlotte Casiraghi was appointed, by her uncle HSH Prince Albert II, to the honorary position of "Godmother" of Public Safety for the Maritime and Airport Police of Monaco. While marking the fiftieth anniversary of the Maritime Police of Monaco the Casiraghi cutie was on hand with her uncle, in full police uniform as the newly named marraine of Public Safety. After greetings and a few pictures Prince Albert and Charlotte boarded the speedboat La Vigilante to oversee a demonstration of rescue operations procedures as two police divers leaped from an overhead helicopter into the sea to rescue the "victims". Later, Charlotte awarded a plaque to the division of Public Safety to mark the occasion and the Sovereign Prince presented them with a model of the police speedboat itself.

Following these ceremonies André Muhlberger, director of Public Safety, addressed the assembled company which included the commandant of the Maritime Police Alain van den Corput, director of the Naval Museum Claude Pallanca, Minister of State Michel Roger, President of the National Council Jean-François Robillon, mayor Georges Marsan, Monseigneur Barsi, Colonel Luc Fringant, Fire Commander Tony Varo and director of the Oceanographic Museum Robert Calcagno, a real "who's who" of the leadership in Monaco. I am very glad Charlotte chose to get involved in this way, I always love to see the Casiraghis getting more involved in the national life of Monaco and this was a great way to draw attention to the long and dedicated service of the Monegasque police forces who have done admirable work over the years preventing Monaco from becoming a haven for organized crime as many once predicted. And it goes without saying that Charlie looked great in her police uniform. She could arrest me anytime.
Posted by MadMonarchist at 12:56 AM