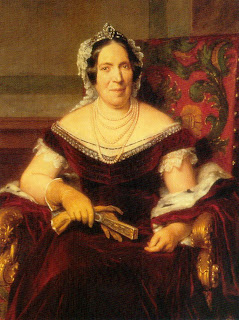 Princess Marie Caroline is a perfect example of how the wives of the princes of Monaco have often played a pivotal part in the history of Monaco and the House of Grimaldi. Coming from a fairly humble background, she met and later married Prince Florestan I of Monaco while both were working at the theatre in Paris. Whereas her artistic and romantic husband had little desire or natural inclination to be a ruling monarch, Princess Caroline was made of stern stuff and she was absolutely crucial in supporting her husband throughout his reign, which was by no means easy. She was also determined that their son, Prince Charles III, would be well prepared and well placed for his future job as sovereign-prince. Many of the considerable accomplishments of the reign of Prince Charles III he owed to his mother Princess Caroline and his son, Prince Albert I, always admired his grandmother for her determination and strong leadership.

It was Princess Caroline who first sold the Blanc family on the idea of establishing a casino and bathing resort in Monaco. She saw the success of such establishments in other countries and had the foresight to know that such an investment could finally end the money-woes of Monaco and the Grimaldis. Not all of her efforts were successful though. Her desire to see her grandson Albert married into the British Royal Family resulted in his failed marriage to Princess Mary Victoria, daughter of the Duke of Hamilton. However, even after the end of that marriage she was the only member of the Grimaldi clan to keep in touch with her former granddaughter-in-law and provided Albert with regular reports on his son, the future Prince Louis II. In short, Princess Caroline was an institution in Monaco for many, many years and was the dominant female influence on the country until her death in 1879. She died in her sleep at the age of 86 and Prince Albert was greatly hurt by her loss. In many ways she had been the backbone of the family since 1841 when her husband came to the throne. Without her leadership it is no exaggeration to say that Monaco would be a very different place today.

Posted by MadMonarchist at 12:39 AM