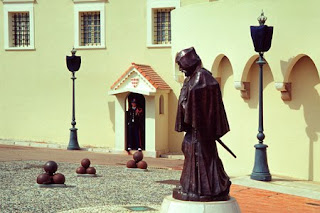 It was on this night in 1297 that Francesco Grimaldi and his relative the future Lord Rainier I stormed the castle on "the Rock" of Monaco, first taking the fortress for the House of Grimaldi. Francesco overpowered the gate guards after approaching the castle disguised as a Franciscan friar, hence the modern Monegasque coat-of-arms showing the Grimaldi colors flanked by two men monk robes holding swords over their heads. Today marks the 713th anniversary of the Grimaldi monarchy reigning over Monaco.
Posted by MadMonarchist at 12:58 AM