Charlotte and Gad - I Still Don't Get It 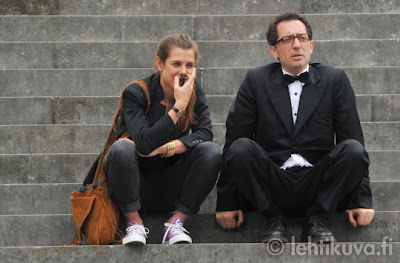 Here we see Charlotte Casiraghi, last Thursday with her (I guess it's 'official') boyfriend (if you can call a 40-year old a "boy") Gad in Paris on the set of the new film "L'ecume des jours" directed by Michel Gondry. What can I say? I just don't see it. I still don't get it. I never understood what she saw in Alex and I don't understand what she sees in this 40-year old father of one either. Does that make me a bad person? I don't think so (I mean, I don't think that makes me a bad person, there are plenty of other areas in which I absolutely qualify I'm sure). The fact that some seem to think I'm picking on Gad only because of his appearance, makes me think I'm not the only one who doesn't understand why a gorgeous young girl would find him attractive. They must think the same, because they assume that's the only real problem anyone could have with him. Well, for the record, I never understood the horde of women who thought Tom Cruise was such a hunk (and I mean like from his "Top Gun" days before he went sofa-jumping-scientology-insane on us). I always thought his face reminded me of a rat. So, what do I know? I would certainly never claim to be an expert on what makes for an attractive man (though I do have very definite opinions about what makes for an attractive woman and I have developed my own theory on how Brazil is planning to rule the world via supermodels -but that's another story). Bottom line is, I just think Charlotte could do better.

I don't know Gad, I've never met him, I have no idea what his personality is like and I have nothing against the man. With Charlotte, it's different though and I am a little surprised that so many people fail to understand the difference. I've watched Charlotte grow up, I positively adore the girl and it doesn't matter if you are a friend, family member or simply a fan, when you are fond of someone you will always want the best for them and will naturally incline toward being critical of any romantic interest they 'bring home' (so to speak). This is also a bit of a special case I would think because, the post-Grace and Rainier Grimaldis have not exactly had the best luck when it comes to romance and I am sure that also inclines me to be a bit over protective. I don't have anything against Gad and I'm not terribly worried about Charlotte. She has a good head on her shoulders and has always taken these sorts of things seriously. I haven't always approved of her actions (nor anyone else) but I'm confident she knows what she is doing and will be okay. If she finally decides that Gad's the guy for her I will wish them all the best. Sincerely. But that doesn't change the fact that I think she could do better. She could date the most perfect man in the world and, sorry, I'd probably still think she could do better because I just have a hard time seeing anyone being good enough for "my" Charlotte.
Posted by MadMonarchist at 2:21 PM