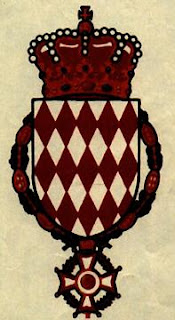 Antonio Grimaldi was the brother of Lord Charles I (sometimes known as Charles the Great in Grimaldi family history) and Antonio was always known as being somewhat the rebel of the family. Antonio, unsurprisingly, pursued a naval career and, like many of the early Grimaldis, became an admiral. In 1332 he won a brilliant victory over the Catalan pirates who had been bedeviling the Monegasque sea lanes for some time. These Catalans were mostly in the employ of the Aragonese who were in competition with the Italians for control of the Mediterranean Sea. Based out of Barcelona they had captured the island of Sardinia and enjoyed near-unrivaled supremacy before the Genoese saw an opportunity when the Sardinians rose in revolt. When the Republic of Genoa rushed military forces in to aid the Sardinians it was the beginning of an epic five-year war for supremacy in the region. To offset the Genoese the Catalans allied with her rival Republic of Venice who had been in frequently armed competition with Genoa at least since 1206. This new war in 1331 was an opportunity for Venice to take advantage of the support of the Catalans as well as the usual amount of internecine squabbles in Genoa. 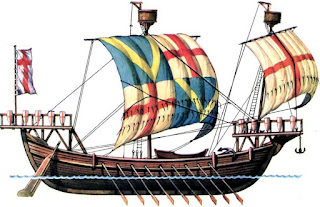 The Catalans attacked Monaco itself but were defeated by Lord Charles I but continued their raids along the Ligurian coast. Charles counter-attacked and part of this effort was led by his brother Antonio who won the aforementioned victory over the Catalans in 1332. It proved something of a turning point as the Grimaldis began to wear down the Catalans until they finally admitted defeat and sued for peace in 1337. Yet, not long after, Genoa again fell into turmoil that would entangle the Grimaldis when the famous “Four Families” (the Houses of Grimaldi and Fieschi -who were Guelfs and the Houses of Doria and Spinola -who were Ghibellines). In 1339 when the Spinolas and Dorias were riding high a revolt broke out that resulted in the election of Simon Boccanegra as the first Doge of Genoa. The four families were united in their opposition to him and eventually forced his resignation after which Giovanni di Murta was elected to succeed him on Christmas Day 1344. He made peace with some of the Genoese nobles but spurned the House of Grimaldi.

Well ensconced and prepared in Monaco, the Grimaldis prepared their forces for an armed entry into Genoa with Antonio Grimaldi leading the way. The operation was postponed, however, when Philip of France called on the Grimaldis to help him in his fight with the formidable King Edward III of England. However, Antonio Grimaldi was soon back and in 1353 (one year after his installation as joint-ruler of Monaco) at the battle of Loiera the Venetians and Aragonese administered a crushing defeat on the Genoese. Despite their differences, the House of Grimaldi had supported Genoa in this fight and Antonio participated. There is no doubt the battle was a disaster for Genoa with losses of 2,000 killed, 3,500 captured and 40 galleys lost but the Genoese authorities tried to save their own reputations by blaming the whole defeat on Antonio, accusing him of “ineptitude and cowardice”. Genoa had to turn to the Dukes of Milan for protection. Lord Antonio continued to be co-ruler of Monaco until 1357 when Genoa, refurbished somewhat, drove them out and reasserted control of Monaco for the first time since 1331.
Posted by MadMonarchist at 7:09 AM