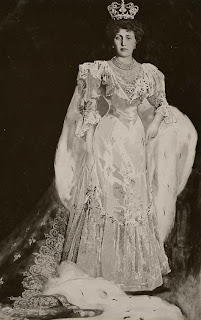 Victoria Eugenie was born in Scotland in 1887, the daughter of Prince Henry of Battenberg, granddaughter of Queen Victoria and first cousin of King George V of Great Britain. She was named after her grandmother Queen Victoria and her godmother the Spanish-born Empress Eugenie of France, consort of Emperor Napoleon III (who happened to be good friends with the Grimaldis of Monaco). Due to an incorrect reading of her name she became known to her family as Ena. Her father died while serving in Africa and Ena grew up in the court of Queen Victoria. In 1905, while at a dinner hosted by King Edward VII, the princess caught the eye of His Catholic Majesty King Alfonso XIII of Spain. A long-distance courtship began despite great misgivings from Alfonso's family over Ena's Protestant religious, rather obscure German heritage and the haemophilia that was carried by Queen Victoria's family.

In spite of all this King Alfonso XIII was determined to marry Victoria Eugenie and only a year later they were engaged and soon married after a marriage treaty was agreed upon between the British and Spanish governments which required the removal of the princess from the British royal succession for marrying a Catholic. On May 31, 1906 the couple married and on their wedding day only narrowly escaped an attempt on their lives by an anarchist bomber. This may have been a clue as to things to come. Victoria Eugenie, Queen of Spain, was in general not accepted by the Spanish people and when her first child, a son, was found to have haemophilia King Alfonso XIII held his wife responsible and never forgave her. While it was true that the Queen did pass on the disease it is also true that Alfonso knew this would be a possibility before he insisted on marrying her.

The couple went on to have seven children but were never reconciled and finally lived mostly apart with Queen Ena devoting her time to charity work. In 1923 Pope Pius XI awarded her the Golden Rose. She continued her work to help the poor and promote education until the coup of 1931 forced the Spanish Royal Family into exile after which Spain was declared a republic and the country soon fell into civil war. Queen Ena lived in the U.K. until the government informed her that she was unwelcome after which she moved to Switzerland. She saw her husband again in Rome in 1938 on the occasion of the baptism of her grandson Juan Carlos (the current King of Spain). The former King died in 1941.

For a long time the Grimaldis of Monaco had been good friends with the Bourbon family and also had good relations with the family of General Francisco Franco who ruled Spain after the civil war until his death and the restoration of the monarchy. It was through these ties of friendship that HSH Princess Grace came to know the Spanish Royal Family and, in her study of the world she married into, came to be an admirer of Queen Ena. It was a mark of the great respect Princess Grace had for the Queen that she named her godmother of her only son, Prince Albert II, when he was born in 1958. Queen Ena last visited Spain in 1968 for the baptism of her great-grandson Prince Felipe of the Asturias. She died at her home in Switzerland the following year at the age of 81. 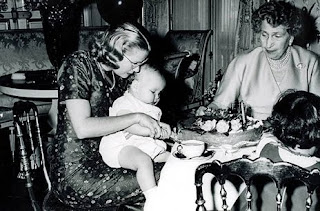 Posted by MadMonarchist at 12:26 AM