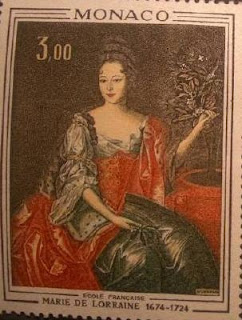 Marie de Lorraine was Princess of Monaco from 1701 to 1724. She was born in Paris on August 12, 1674 to Louis d’Armagnac de Lorraine-Harcourt, Grand Squire of France, and Catherine de Neufville de Villeroi. She was favored by her parents and described as rather spoiled and allegedly took after her mother who held her nose rather high as they say. On June 13, 1688 at Versailles she was married to the Duke of Valentinois (later Prince Antoine I of Monaco) in a match that was arranged in part by King Louis XIV. She did not bring a large dowry to the Grimaldi clan but was a pretty and vivacious young girl being barely 16 at the time of the wedding. One is left wondering what was the reasoning behind the match.

Marie was a vivacious, fun-loving girl known for her infatuations with balls, parties and flashy fashions with shockingly low necklines. As taken as Antoine might have been with dark eyes and lavish chestnut hair of his young bride the two had very different personalities. Prince Antoine was known for his love of opera and opera singers in particular and considered himself an expert on female quality but while Marie might have had ideal physical attributes she did not display the necessary qualities for a wife, consort and mother. Some think the driving force behind the match might have been the famous Madame de Maintenon, longtime mistress of Louis XIV, who pushed for the marriage to remove Marie de Lorraine as rival once the King had started to notice her.

However, her marriage to Prince Antoine did not remove her from notice by other high placed young men and one observer noted that Marie de Lorraine was, “More of an elegant flirt than all the ladies of the kingdom put together”. Marie’s father-in-law, HSH Prince Louis I, tried to hush the gossip about affairs between Marie and the young men who frequently visited her parents’ home as well as those about Prince Antoine and the Parisian opera singers when he was not away at the front fighting in the French army. Prince Louis advised his son to be tolerant and forgiving of his new bride on the grounds of her youth and try to master her by winning over her mother.

At the behest of Prince Louis, King Louis XIV bid Marie to go to Monaco with Louis I while her husband was away with his regiment, where he was shortly wounded at the battle of Namur. Marie at first seemed to enjoy the independence of living in Monaco, establishing herself in a residence called “le désert”, situated at the extreme north-east of the Rock. She was not always on the best of terms with her husband, a man whose commanding size and rugged features earned him the nickname “Goliath” while in the army. When Antoine announced his return to his regiment she begged to be allowed to go back to Paris and, inexplicably, once there began to spread rumors that Prince Louis I had tried to rape her.

Prince Louis was aghast by her behavior as was most of the French court who knew Louis I as a very kind and genteel man. Prince Antoine was absolutely livid about the whole absurd affair and when he returned to Paris lived separately from Marie for six years during which Marie engaged in numerous affairs. Finally King Louis XIV intervened with her father to effect a reconciliation of the couple.

This was no easy task as the veteran warrior Prince Antoine was known to be short-tempered and according to several accounts had hung in effigy all of the lovers Marie had allegedly taken. When King Louis spoke disapprovingly of this the Hereditary Prince of Monaco retorted that he should be grateful he restricted himself to hanging straw men only. When Marie’s mother fetched her back to Antoine she had to walk through the effigies on her way to the house. Nonetheless, a reconciliation of sorts was effected which produced the only two surviving children of the six Marie and Antoine had, one of which was his heir Princess Louise-Hippolyte.

The lack of a male heir troubled Prince Louis I greatly and there were rumors that he would have preferred the Chevalier de Grimaldi, his natural son, to succeed him instead of Prince Antoine but as the chevalier was illegitimate this was impossible and in 1701 Antoine and Marie became Sovereign Prince and Princess consort of Monaco.

The couple returned to Monaco together to take up their official duties and lived together, if not exceptionally happily, at least without any scandals or disastrous public fights like they had before. However, by this time it was certain that Marie would have no more children and the future of the Principality of Monaco would depend on the marriages her two daughters made. Marie de Lorraine, Princess of Monaco died in Monaco on October 30, 1724 after having married Louise-Hippolyte to Jacques (Mantignon) Grimaldi and her younger, Margaretha Camilla to Marshal Duke d’Isenghien.
Posted by MadMonarchist at 12:18 AM