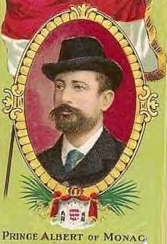 It was during this week in 1914 that the "guns of August" were heard, marking the start of the First World War as German troops marched into Belgium and France. The conflict, thankfully, would not touch Monaco directly but the Principality and moreso the House of Grimaldi played a part in the conflict. As we have discussed before, HSH Prince Albert I was a good friend of the German Kaiser Wilhelm II. The two had very different characters to be sure, but both shared a love of hunting, archaeology and most of all a love of the sea and sailing. In fact, the Prince was with the Kaiser on his yacht when the German monarch first learned of the murder of the Austrian Archduke Franz Ferdinand. Prince Albert I, after serving in the Franco-Prussian War, became a pacifist and he did his best to try to prevent World War I from starting by trying to get the main players together to talk out their differences -something which is hard to say would not have worked since there really wasn't much motivation for going to war in the first place. Everyone was going to war because everyone else was. The only people who did not have any choice in the matter were the French and the Belgians; they went to war because they were attacked, though even the French were far from innocent in the whole affair as they had been pushing the Russians to intervene in what had been a localized Austro-Serbian conflict. Prince Albert was very distressed that his peace efforts were rejected but he still did all he could to minimize the damage. His personal appeals to the Kaiser are credited with saving the French towns of Sissonne and Marchais from total destruction.

The outbreak of war was particularly painful for Prince Albert I because Monaco had always been very close to France and by his mother the Prince of Monaco was half Belgian. He was pained by what happened to France and Belgium but was simply heartbroken at the tremendous waste of the entire conflict, for all those involved. He allowed the Principality of Monaco to be used freely by the Allied powers to send wounded soldiers to recover and relax but he wanted no part in the actual conduct of the war. This almost brought him into conflict with his son and heir Prince Louis, a veteran of the French army who was determined to rejoin and serve at the front. Prince Albert wanted no part in causing any harm to anyone and did not really want his son to either, however, he came to understand the point of view of Prince Louis who felt that if he did not go to the front he would be letting down all of his friends and comrades in the French army he had trained and served with. He allowed him to go and Prince Louis proved to be a great soldier, upholding the reputation of his family going back to the Hundred Years War and before. When peace came, Prince Albert breathed a sigh of relief but although Monaco had been untouched by the fighting, it was not unaffected by it.

In those days the gaming industry was the primary source of income for the principality and the customer base was almost exclusively the wealthy aristocrats and minor royals of Europe. World War I brought business to a halt and after the war most of the great noble and royal houses who had frequented Monte Carlo were either destitute or had been overthrown. It would also not be long until another world war broke out that would see Monaco occupied and bombed. Prince Albert I had never been fond of the gaming industry himself but tolerated it as something necessary. It would be left to his son, Prince Louis II and even more so his successor Prince Rainier III, to see the Monegasque economy fully recovered and diversified to prevent such hard times in the future.
Posted by MadMonarchist at 12:53 PM

Email ThisBlogThis!Share to TwitterShare to FacebookShare to Pinterest
Labels: Albert I, Louis II, World War I