Princess Stephanie on the Job, Alone 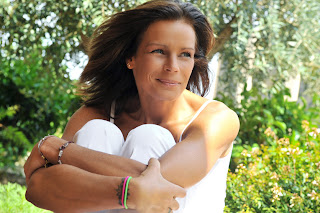 Big brother was out of town, on his honeymoon, but that didn't stop Princess Stephanie from carrying on with her duties to the charity she cares most about. She was all on her own this year but still at ease and all smiles as usual for the annual Fight AIDS Monaco summer gala on Wednesday. A concert and charity raffle were held to raise money for Fight AIDS Monaco, of which, as we know, Princess Stephanie is founder and President and the Life House which the Princess built to care for HIV/AIDS victims. The special entertainment was the British rock band "Supertramp" (formerly known as "Daddy" back in the day). Am I the only one that found that slightly humorous? Maybe it was part of a subtle theme: remember kids, if you act like a tramp, even a super tramp, you might end up with AIDS! Of course, it is truly commendable how Princess Stephanie has devoted herself to this charitable service and is one of the benefits of having a royal (or Princely) family that is often so common as to be taken for granted. The Princess does a great deal of good for a great many people -and she is certainly not alone in that amongst the royals of the world.
Posted by MadMonarchist at 1:19 AM