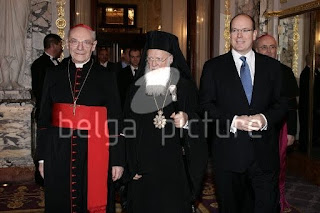 HSH Prince Albert II of Monaco, high patron of the Cardinal Paul Poupard Foundation, awarded the first prize of the foundation, 'Prix de la Fondation Cardinal Paul Poupard' to HAH Ecumenical Patriarch Bartholomeos I. HE Paul Cardinal Poupard (seen above with the Patriarch and Sovereign Prince) is the President Emeritus of the Pontifical Council for Culture and President Emeritus of the Pontifical Council for Interreligious Dialogue for the Holy See. The award was given out yesterday in a ceremony at the Hotel de Paris in the Principality of Monaco. I am always glad to see Prince Albert II, head of one of the few remaining officially Catholic monarchies in the world, taking religious issues seriously. This is also good to see as in recent years, particularly since the reign of HH Pope Benedict XVI, HAH Ecumenical Patriarch Bartholomeus I and most recently the newly installed Patriarch of the Russian Orthodox Church there has been a warming of relations between the eastern and western churches. The Pope has been reaching out to the Orthodox community as never before and the major Patriarchs in the east have also made statements more friendly than in the past about the Latin Church. Hopefully this will be another step in the right direction toward religious unity between the Catholic and Orthodox communities.
Posted by MadMonarchist at 5:32 PM