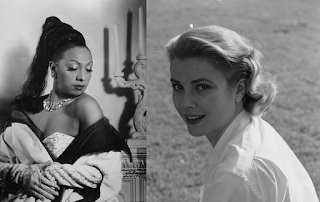 One of the most seemingly unlikely friendships in the recent history of Monaco was that between Princess Grace and the African-American singer/dancer/actress Josephine Baker. One was from a well-to-do patrician family of New England while the other was a poor, Black orphan girl from St Louis, Missouri. Both became famous but whereas there was not a great deal of mixed feelings about Princess Grace (generally, to know her was to love her), Josephine Baker was a highly controversial figure due to her outspoken opinions on politics, her renunciation of her American citizenship and, most prominently, her active role in the civil rights movement. Although not controversial today, it certainly was at the time and this was one thing, besides the most basic background in “entertainment” that the two women had in common. Both were committed to the idea that to discriminate on the basis of race was absolutely abhorrent.

Josephine Baker was born Freda Josephine McDonald in 1906 in east St Louis and was raised in Little Rock, Arkansas by two former slaves, Richard and Elvira McDonald who adopted her. Forced to work at a young age, she dropped out of school at 12 and lived on the streets, dancing for tips. Finally she won a place in a vaudeville show, moved on to New York and began working her way up the slippery show biz ladder. When Grace Kelly left home to become a model and ultimately an actress her parents, particularly her strict German-American mother, thought it was scandalous. She would have been absolutely mortified by some of the career turns of Josephine Baker who, in addition to the usual song and dance numbers, was not opposed to more “exotic” performances as well. In time she became a big star, appearing in several films, having a number of hit songs and won fame as the “Black Pearl”, the “Bronze Venus” and the “Creole Goddess” during her career.

Obviously, because the hardships she herself had endured, having been raised by former slaves and seeing the plight of those around her, Josephine Baker was an outspoken campaigner for civil rights for African-Americans and an avowed enemy of slavery and the slave-trade which, sadly, was still going on in parts of Africa at the time. Sometimes this got her into a great deal of trouble. For instance, when Italy invaded Ethiopia most Blacks in America rallied to the side of Emperor Haile Selassie, seeing the conflict in simple racial terms as a fight between Black Ethiopians and White Italians. Josephine Baker didn’t automatically see things that way. All that mattered to her was that slavery was still practiced in Ethiopia and it did not exist in Italy, so Josephine Baker voiced her support for Mussolini and offered to campaign to help raise troop of Black soldiers to fight alongside the Italians to “liberate” the slaves of Ethiopia. This was something, particularly after the onset of World War II, that many Americans would never forget or forgive her for but it is important to understand the reason behind what she said.

This was part of the reason for her decline in popularity in the United States just as she was becoming a huge celebrity across the pond in France. She came back to France in 1937 and married a Frenchman, renouncing her U.S. citizenship. Nonetheless she continued to support the civil rights movement in America. She adopted a number of mixed-race children, refused to perform before segregated audiences and later worked with the NAACP and Dr. Martin Luther King Jr., even speaking at his famous March on Washington. When World War II broke out she quickly offered her services to France as a spy, relating talk from German, Italian and Japanese officials at elite parties to the government. After the invasion of France she smuggled messages for the Free French forces and after the war was given the Cross of War and Legion of Honor by Charles DeGaulle for her efforts.

She met Grace Kelly for the first time in 1951 when she was refused service, because of her race, at Sherman Billingsley’s Stork Club in Manhattan. Grace witnessed this and was instantly outraged, rushing over to support Josephine before storming out of the club with her entire party. Grace vowed never to give her business to the establishment again and she didn’t. From that time on Grace and Josephine Baker always remained good friends. Later, when some bad financial decisions left her nearly destitute her friend, by that time HSH Princess Grace of Monaco, offered Josephine a villa and financial assistance to help her get back on her feet. Josephine later performed in Monaco at the invitation of Princess Grace and Prince Rainier. She continued her work for civil rights in America and was even offered the leadership of the movement after the assassination of Dr. King but could not accept because of her commitment to her many adopted children.

Josephine’s final performance in Paris, a celebration of her long career, was financed by Prince Rainier III, Princess Grace and Jackie Onassis. It was a great success but only a few days later she collapsed and went into a coma. Josephine Baker died at the age of 68 on April 12, 1975. She was given full French military honors at her funeral in Paris and was buried at the Cimitière de Monaco in Monte Carlo, mourned by her friend Princess Grace, a co-combatant in the struggle against racial bigotry.
Posted by MadMonarchist at 2:21 AM