The Marriage of Prince Jacques I 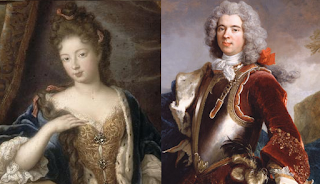 It was on this day in 1715 that Princess Louise-Hippolyte of Monaco married Jacques Francois Leonor Goyon de Matignon. As we have discussed previously, it was not quite a match made in heaven. Still, all parties agreed and, as it was shortly after the death of His Most Christian Majesty King Louis XIV, the marriage contract was signed by the regent, the Duke of Orleans, and the child King Louis XV. Yet, there were problems for the couple from the outset. In their first year of marriage they suffered the lost of their first child and they had to move to Paris to escape the volatile Prince Antoine I who was infuriated when he learned how he had been maneuvered into accepting Jacques as his son-in-law. For his part, Jacques was not pleased about having to give up his own family name and coat of arms to take those of the House of Grimaldi as he was rather proud of his own lineage. Prince Antoine was also broke by a legal dispute with his own daughter after the death of his ex-wife, Marie de Lorraine, who left her fortune entirely to her daughter. The proud old Prince had to suffer the indignity of asking his rather despised but well-to-do son-in-law for assistance.

“You mention the state of your affairs,” Jacques, then the Duke of Valentinois, wrote back, “as though you wish me to do all I can to ease your situation. I will willingly help…on condition, if you please, that you take no steps to prejudice the future interests of your grandson [the future Prince Honore III who would inherit the fortune from his mother one day]…He is such a [good natured] boy that nobody could think of playing a dirty trick on him”. In other words, stop trying to get your hands on my wife’s money and I will toss a few bucks your way. Prince Antoine, the old “Goliath” was not just furious, he was FURIOUS! As he predicted, he later died still in a rage over his treatment by his son-in-law and daughter though most probably still directed at Marie de Lorraine, his late wife, who he regarded as the author of all his misfortunes. It was then that Princess Louise-Hippolyte became Sovereign Princess of Monaco and Jacques the “Sovereign Consort”. However, that situation did not last long either as the beloved Princess was carried away by smallpox just under a year after taking the throne.

That unhappy event marked the start of the brief reign of Prince Jacques I of Monaco. He was opposed from the very start by Princess Isenghien, his sister-in-law, the second daughter of Prince Antoine I. She tried to rally her Grimaldi cousins in the wider family (in Genoa and elsewhere) to challenge her dead sister’s husband. She claimed, not without some justification, that the Monegasque would never submit to a Sovereign Prince who had not a drop of Grimaldi blood in his veins and, indeed, Prince Jacques I was never widely popular. However, he was no fool and tried to foil his sister-in-law by appointed the Chevalier de Grimaldi, an illegitimate son of Prince Antoine I, as Governor of Monaco who would, effectively, rule the principality on his behalf. As it turned out, this was a smart move as the Chevalier was quite a talented individual who ended up governing Monaco for most of the next fifty years with considerable ability.

Prince Jacques I was never fully accepted by the Monegasque population, tolerated might be a better word, but he was not often in Monaco to bother them anyway. Knowing the temperament of the public, and being more at home in France anyway, he spent most of his short reign in Paris. In 1733 he abdicated in favor of his son, Prince Honore III, while the Chevalier de Grimaldi continued to manage the affairs of the principality quite adeptly throughout the boy’s minority and during his service with the French army. He, along with his brother Prince Charles Maurice of the Knights of Malta, renewed the family tradition of fighting England in the employ of the King of France such as at the battle of Fontenoy. Prince Jacques I retired to Versailles and Paris and died in 1751. His line would continue to provide the Princes of Monaco until the accession of Prince Rainier III. And it all started with a controversial marriage on October 20, 1715.
Posted by MadMonarchist at 12:32 AM

Email ThisBlogThis!Share to TwitterShare to FacebookShare to Pinterest
Labels: History, Jacques I, marriage