Grimaldi Roots: The Guelphs and Ghibellines 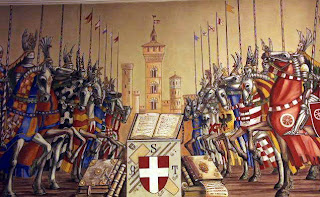 The clash that brought about the Grimaldi seizure of Monaco was the longstanding feud in the Italian states between the Guelphs and Ghibellines. This feud lasted throughout most of the Middle Ages and achieved epic proportions. Even the feud between the fictitious families of Romeo and Juliette originated in the clash between the Guelph and Ghibelline factions. As readers of this blog probably know the Grimaldi family originated in the Italian city-state of Genoa and their involvement in the feud came with the clash between the Holy Roman Emperor Frederick II and Pope Innocent IV. Genoa split into Guelph and Ghibelline factions with the Guelphs supporting the Pope and the Ghibellines supporting the Emperor. The Grimaldis and the Fieschis were Guelphs but the Ghibellines were victorious and drove them out of Genoa.

It all came down to the doctrine that two powers govern the world; the temporal and the spiritual which Innocent III compared to the sun and the moon. The height of temporal power in old Christendom was the Holy Roman Emperor while the highest spiritual authority was the Supreme Pontiff. Both were to work in concert but it was, perhaps, inevitable that they would clash over who was finally supreme of the two. The Popes claimed that, as it was they who were given their authority by Christ himself (in the form of the keys to St Peter) and that Christian teaching stressed that the spirit was greater than the flesh and that it was they who crowned and anointed the emperor the popes were therefore superior. The Emperor, however, viewed himself as the viceroy of God on earth and thought he should confirm papal elections and appoint bishops himself. Did not the authority of the Emperor of Rome predate the authority of the Pope?

Naturally, the details that started the split were soon forgotten in favor of more practical rivalries. In large part the nobility supported the Emperor as it was he who granted them their titles and in whose name they finally exercised authority. The merchants and freemen of the Italian city-state republics tended to favor the Pope as he was content to let them govern themselves and did not interfere with their business. The Pope was also one of their own, someone they felt closer to than a distant German monarch. The names for the factions also come from Germany, originating in the rivalry between the House of Welf (Guelph) who were the Dukes of Bavaria and the Imperial House of Hohenstaufen (originally Dukes of Swabia) whose ancestral castle was Waiblingen (Ghibelline) in Franconia.

When the Grimaldis first seized the Rock at Monaco it was from a Ghibelline garrison for as Genoa was seized by one side or the other it was usual that the losing party was driven into exile. For aid the Grimaldis turned to Charles of Anjou, comte de Provence, whom they had served in the past and in appreciation he granted them the lands of Ventimiglia, Menton and Roquebrune to make up for their losses in Genoa. They lost when Charles of Anjou had to have the help of Genoa in a conflict with Sicily and as soon as his protection was withdrawn the Genoese pounced and recaptured Monaco. After a period of time the Guelph faction won and the Grimaldis took back Monaco but ten years later the Ghibellines were back. Robert of Anjou finally intervened to end the feud and it was through his mediation that Monaco was permanently returned to the House of Grimaldi and placed under the rule of Lord Charles Grimaldi, son of Rainier I.

Posted by MadMonarchist at 12:16 AM