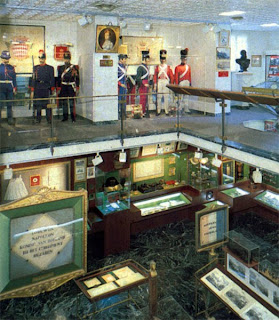 HSH Prince Louis II, a dedicated military man, was fascinated by the history of Imperial France and the career of Napoleon Bonaparte. During his reign he amassed a considerable collection of historical relics related to the period and to preserve and share this collection established the Napoleon Museum of Monaco. Most of the items came from Prince Louis II but the collection was also enlarged by his grandson and successor Prince Rainier III who moved the museum to the south wing of the Princely Palace in 1970. There are over a thousand pieces and documents related to the First Empire and the life, battles and exiles of the famed French conqueror. The collection includes many objects that belonged to Emperor Napoleon I, clothes worn by his son Napoleon II, King of Rome, and holy images from his exile on St Helena.

The Napoleonic epic is evoked through some very personal items such as the hat worn by the Emperor at Marengo, his red leather desk blotter, the watch he wore during the Russian campaign, his signature at the bottom of a letter and so on. As for the Napoleonic Wars there are numerous related items as well such as cannonballs from the battle of Austerlitz, a wide variety of weapons including the saber of Marshal Pierre Augereau and the battalion flag from the island of Elba. Aside from the Napoleonic items there is also a great deal of historical material related to Monaco itself. On the magnificent mezzanine floor there is, on display, the Charter of Independence of Monaco given by the royal assent of King Louis XII of France, a letter written by the famous French King Louis XIV to HSH Prince Antoine I of Monaco, a collection of rare coins from Monegasque history, a similar collection of stamps and a display of the various uniforms of the Prince of Monaco’s soldiers worn throughout the centuries.

The museum is located at the Princely Palace (not in Monte Carlo as is sometimes said) and is open most days other than holidays and is closed from November 12 to December 16. Current admission is 4 euros for adults and 2 euros for children ages 8-14. Groups have a special rate of 3 euros. A little money can also be saved by grouping admission to the museum together with the tour of the apartments of the Princely Palace. The Princely Family has a great deal of history in connection to Napoleon, several Princes of Monaco serving in the French Imperial Army and one, the future Prince Honore V, served as equerry to the Empress Josephine. The history of the Grimaldis and the Napoleonic era can be seen a little more detail in this post.
Posted by MadMonarchist at 12:20 AM